The Holy Disciple from among the Seventy Aristoboulus, 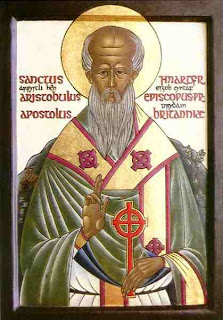 Bishop of Britanium (Britain), was born on Cyprus. Together with his brother, the holy Disciple from among the 70, Barnabus, he accompanied the holy Apostle Paul on his journeys. Saint Aristoboulus is mentioned by the Apostle Paul in the Epistle to the Romans (Rom 16: 10). The Apostle Paul made Saint Aristoboulus a bishop and sent him to preach the Gospel in Britanium, where he converted many to Christ, for which he suffered persecution by the pagans. Saint Aristoboulus died in Britain. His memory is on 31 October and on 4 January also amidst the Sobor / Assemblage of the 70 Disciples.
Posted by Justinian at 08:40

Rolex - probably the world's top luxury marque - has rolex replica uk decided to put a segment of its venerable advertising budget into YouTube, the major online video sharing website. Rolex is known (perhaps famous) for its healthy, but finicky advertising budget. It is also widely known among watch writers and rolex replica uk journalists to be a brand that rarely speaks with any type of media in regard to their products. Fanatically protective with their image and rolex replica sale market, Rolex's participation with YouTube as an advertising partner is interesting to say the least. Google, which own YouTube, has implemented a range of ad replica watches formats on the extremely popular website. Advertising on YouTube is mostly contextual and replica watches uk automated. This means that advertisements are matched to videos that are replica watches sale contextually or demographically related to the advertisement.