St. Edwin, the Martyr-King of Northumbria 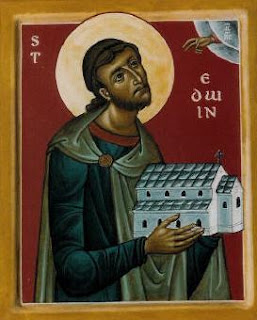 Saint Edwin (Eadwine) was the son of Alla, King of Deira, and was born around 584. When his father died, Edwin was cheated out of his kingdom by King Ethelred of Bernicia, who united Bernicia and Deira into a single kingdom of Northumbria.

Edwin fled to East Anglia and took refuge with King Redwald. Redwald, because of the threats and promises he had received, was persuaded to give Edwin up to his enemies. Edwin was warned by a friend of the danger he faced. That night, a stranger promised that his kingdom would be restored to him if Edwin would do as he taught him. Edwin agreed, and the stranger laid his hand on Edwin's head, telling him to remember the gesture.

In time, Edwin became ruler of the entire north of England and, by force of arms, obliged the other kings to acknowledge him as sovereign. He married Ethelburga, the daughter of St Ethelbert (February 25), the first Christian king in England. Ethelburga was also the sister of King Ealbald of Kent.

There was an attempt on Edwin's life in 626, on the eve of Pascha. That night the queen gave birth to a baby girl, and King Quichelm of the West Saxons sent an assassin named Eumer to kill Edwin with a poisoned dagger. Eumer was admitted to Edwin's presence and tried to stab him. He would have succeeded if it had not been for Lilla, King Edwin's faithful minister, who placed himself between the king and the assassin. The blade passed through his body, however, and wounded the king. The assassin was killed, and Lilla saved Edwin's life at the cost of his own. This event is commemorated by a stone cross which stands on Lilla Howe near Flyingdales Ballistic Missle Early Warning System on the North Yorkshire Moors. Before the Pickering-Whitby road was built in 1759, this cross served as a guide for those who walked across the moors from Robin Hood's Bay to Saltergate.

Edwin thanked his gods that he had been spared, but he was told by Bishop Paulinus of York (October 10) that he had been saved by the prayers of his queen. The bishop said that he should show his gratitude to the true God by allowing his newborn daughter to be baptized. The child was baptized on Pentecost, and was given the name Eanfleda.

The king, who had been slightly wounded in the attack, promised Bishop Paulinus that he would become a Christian if he were restored to health, and if he would triumph over those who conspired to kill him.

As soon as his wound healed, King Edwin marched against the King of the West Saxons with an army. He vanquished the opposing army, killing or capturing those involved in the plot against him. He no longer followed the pagan religion, but he put off his promise to embrace Christianity, and it was many years before Edwin converted. He would sit alone for hours trying to decide which religion he should follow. St Paulinus, informed by a revelation about the stranger's promise to the king, went to Edwin and laid his hand upon his head. "Do you remember this gesture?" he asked.

The king trembled with astonishment, and would have fallen at the bishop's feet. St Paulinus gently raised him up and said, "You see that God has delivered you from your enemies. Moreover, He offers you His everlasting Kingdom. See that you fulfill your promise to become a Christian and keep the commandments of God."

King Edwin said that he would seek the counsel of his advisers and urge them to convert with him. He asked them what he should do. Coifi, a pagan priest, said it was readily apparent that their gods had no power. Another person said that this brief life was inconsequential, compared to eternity.

St Paulinus addressed the gathering, and when he had finished, Coifi told the king that the altars and temples of their false gods should be burned. The king asked him who should be the first to profane them. Coifi replied that he should be the first, since he had been foremost in leading their worship. The chief priest of the pagans was not permitted to bear arms or to ride a horse. It was customary that he ride a mare. Coifi, however, asked for a horse and for arms. Mounted on the king's own horse, Coifi threw a spear into their temple, commanding the others to pull it down and set it afire. This place was not far from York, and today it is known as Godmanham.

In 627, the eleventh year of his reign, St Edwin was baptized by St Paulinus of York in the wooden church of St Peter. St Edwin began the construction of a new stone church, which was completed by his successor St Oswald (August 5).

St Edwin ruled his kingdom in peace for six more years, and continued to practice and promote Christianity. He was killed in a battle with Penda of Mercia and Cadwalla of Wales in 633, when he was forty-eight years old, at a place now known as Hatfield.

St Edwin's body was buried at Whitby, but his head was buried at York in the church he had built. Most of the early English calendars list St Edwin as a martyr.

After the death of St Edwin, his wife St Ethelburga (April 5) returned to Kent, where she became the abbess of a monastery which she founded at Lyminge.
Posted by Justinian at 08:43