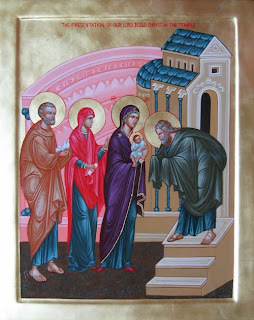 Troparion of the Meeting (Tone 1)

Rejoice, thou who art full of grace,
Mother of God and Virgin,
for from thee arose the Sun of Righteousness, Christ our God,
to give light to those in darkness.
Rejoice thou also, righteous Elder, who didst take in thine arms the Redeemer of our souls,
Who also gives us the grace of resurrection.

Kontakion of the Meeting (Tone 1)

Thou Who didst sanctify the Virgin's womb by Thy birth
and bless Simeon's hands as was fitting
hast now come to us and saved us, O Christ our God.
But grant peace in the midst of wars to Thy community,
and strengthen the Church which Thou hast loved,
O only Lover of mankind.
On the Feast of the Meeting of the Lord, the Church commemorates an important event in the earthly life of our Lord Jesus Christ (Lk 2: 22-40). On the 40th day after birth the God-Infant was taken to the Jerusalem Temple -- the centre of religious life of the God-chosen nation. By the Law of Moses (Lev 12) a woman, having given birth to a child of the male gender, was forbidden for 40 days to enter into the Temple of God. After this interval the mother came to the Temple with the child, so as to offer to the Lord thanksgiving and a purification sacrifice. The MostHoly Virgin, the Mother of God, did not have need for purification, since without defilement she had given birth to the Source of purity and sanctity, but in profound humility she submitted to the precepts of the Law.

At this time there lived at Jerusalem the righteous elder Simeon (the account about him is located under the day of his commemoration -- 3 February). It had been revealed to him that he would not die until he should behold Christ the Saviour. By inspiration from above, the pious elder went to the Temple at that very moment when the MostHoly Mother of God and Righteous Joseph had brought there the Infant Jesus, so as to fulfill the ritual ceremony of the Law. The God-Bearer Simeon took the God-Infant in his arms, and having given thanks to God, he uttered a prophecy about the Saviour of the world: "Now lettest Thou Thy servant depart, O Lord, with peace according to Thy word, wherefore hath mine eyes beheld Thy salvation, which Thou hast prepared before the face of all peoples, a light to the enlightening of gentiles and the glory of Thy people Israel" (Lk 2: 29-32). Righteous Simeon said to the MostHoly Virgin: "Behold, This One is set for the fall and rising up of many in Israel and for the sign spoken against, and for Thee Thyself a sword shalt pierce the soul, so that the thoughts of many hearts might be revealed" (Lk 2: 35).

At the Temple also the 84 year old widow Anna the Prophetess, daughter of Phanuel (Comm. 3 February), "who did not leave the temple, serving God both day and night in fasting and prayer. And she also at that time, having drawn near, glorified the Lord and spake about Him (the God-Infant) to all awaiting deliverance at Jerusalem" (Lk 2: 37-38).

Before the Birth of Christ, all righteous men and women lived by faith in the Future Messiah the Saviour of the world, and they awaited His coming. The final righteous ones of the closing Old Testament -- Righteous Simeon and the Prophetess Anna -- were deemed worthy to meet at the Temple the Bearer of the New Testament, in the Person of Whom both Divinity and humanity do meet.

The Feast of the Meeting of the Lord is among the most ancient feasts of the Christian Church. It is known, that on the day of this solemnity were proclaimed sermons by Sainted Bishops Methodios of Patara (+ 312), Cyril of Jerusalem (+ 360), Gregory the Theologian (+ 389), Amphylokios of Iconium (+ 394), Gregory of Nyssa (+ 400), and John Chrysostom (+ 407). But in spite of its early origin, this feast was not so solemnly celebrated until the VI Century. During the reign of Saint Justinian in the year 528, a catastrophe befell Antioch -- an earthquake, in which many people perished. And upon this misfortune there followed others. In the year 544 there appeared a pestilential plague, daily carrying off several thousand people. During these days of widespread travail, it was revealed to a certain pious Christian that the celebration of the Meeting of the Lord should be done more solemnly.

And without all contradiction the less is blessed by the better. And here men that die receive tithes; but there he [receiveth them], of whom it is testified that he liveth. And as I may say, Levi also, who receiveth tithes, payed tithes in Abraham. For he was yet in the loins of his father, when Melchisedec met him. If therefore perfection were by the Levitical priesthood (for under it the people received the law) what further need [was there] that another priest should rise after the order of Melchisedec, and not be called after the order of Aaron? For the priesthood being changed, there is made of necessity a change also of the law. For he of whom these things are spoken pertaineth to another tribe, of which no man gave attendance at the altar. For [it is] evident that our Lord sprang from Judas; of which tribe Moses spoke nothing concerning priesthood. And it is yet far more evident: for that after the similitude of Melchisedec there ariseth another priest, Who is made, not after the law of a carnal commandment, but after the power of an endless life. For he testifieth, Thou [art] a priest for ever after the order of Melchisedec.

And when the days of her purification according to the law of Moses were accomplished, they brought him to Jerusalem, to present [him] to the Lord; (As it is written in the law of the Lord, Every male that is the first born of his mother shall be called holy to the Lord) And to offer a sacrifice according to that which is said in the law of the Lord, A pair of turtle-doves, or two young pigeons. And behold, there was a man in Jerusalem, whose name [was] Simeon; and the same man [was] just and devout, waiting for the consolation of Israel: and the Holy Spirit was upon him. And it was revealed to him by the Holy Spirit, that he should not see death, before he had seen the Lord's Christ. And he came by the spirit into the temple; and when the parents brought in the child Jesus, to do for him after the custom of the law, Then he took him up in his arms, and blessed God, and said, Lord, now lettest thou thy servant depart in peace, according to thy word: For my eyes have seen thy salvation, Which thou hast prepared before the face of all people; A light to enlighten the Gentiles, and the glory of thy people Israel. And Joseph and his mother marveled at those things which were spoken concerning him. And Simeon blessed them, and said to Mary his mother, Behold, this [child] is set for the fall and rising again of many in Israel; and for a sign which shall be spoken against; (And a sword shall pierce through thy own soul also) that the thoughts of many hearts may be revealed. And there was one Anna, a prophetess, the daughter of Phanuel, of the tribe of Asher: she was of a great age, and had lived with a husband seven years from her virginity; And she [was] a widow of about eighty four years, who departed not from the temple, but served [God] with fastings and prayers night and day. And she coming in that instant, gave thanks likewise to the Lord, and spoke of him to all them that looked for redemption in Jerusalem. And when they had performed all things according to the law of the Lord, they returned into Galilee, to their own city Nazareth. And the child grew, and became strong in spirit, filled with wisdom: and the grace of God was upon him.