The Priest-Martyr Apollinarius, Bishop of Ravenna 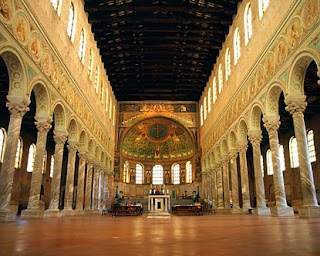 During the reign of the Roman emperor Claudius (41-54), the holy Apostle Peter came to Rome from Antioch, and he ordained the Antiochene Apollinarius, who had come with him, to be bishop of Ravenna. Arriving in Ravenna as a stranger, Saint Apollinarius asked shelter of a local inhabitant, the soldier Ireneius, and in conversation with him revealed also for what purpose he had come. Ireneius had a blind son, whom Saint Apollinarius healed, having turned to the Lord with prayer. The soldier Ireneius and his family were the first in Ravenna to believe in Christ. The saint stayed at the house of Ireneius and preached about Christ to everyone wanting to hear what he said. One of the miracles done by Saint Apollinarius was the healing of the incurably sick wife of the Ravenna tribune, Thecla. After she stood up from her bed completely healthy -- through the prayers of the saint, not only did she believe in Christ, but so also did the tribune. At the house of the tribune Saint Apollinarius constructed a small church, where he offered the Divine Liturgy. For the newly-baptised people of Ravenna Saint Apollinarius ordained two presbyters, Aderetus and Calocyrus, and also two deacons.

Saint Apollinarius preached the Gospel at Ravenna for twelve years, and the number of Christians steadily increased. Pagan priests made complaint against the bishop to the governor Saturninus. Saint Apollinarius was brought to trial and subjected to grievous tortures. Thinking that he had died, the torturers took him out of the city to the sea-coast and threw him in; but the saint was still living. A certain pious Christian widow rendered him aid and gave him shelter in her home. Saint Apollinarius stayed at her home for six months and continued secretly to preach about Christ. The whereabouts of the saint became known when he healed the loss of speech of an illustrious resident of the city named Boniface, at the request of his wife, who besought the help of the saint for her husband. After this miracle many pagans were converted to Christ, and again Saint Apollinarius was brought to trial and tortured, this time setting his bared-feet on red-hot coals. They removed him from the city a second time, but the Lord again kept him alive.

The saint did not cease preaching until they expelled him from the city. For a certain while Saint Apollinarius found himself elsewhere in Italy, where as before he continued to preach the Gospel. And again having returned to Ravenna to his flock, Saint Apollinarius again went on trial and was sentenced to banishment. In heavy fetters he was put on a ship sailing to Illyrica to the River Danube. Two soldiers were responsible to convey him to his place of exile. Three of the clergy voluntarily followed their bishop into exile. Along the way the vessel suffered shipwreck and all drowned, except for the rescued Saint Apollinarius, his acompanying clergy and the two soldiers. The soldiers, listening to Saint Apollinarius, believed in the Lord and accepted Baptism. Having found shelter nowhere, the travellers came to Mycea, where Saint Apollinarius healed a certain illustrious inhabitant from leprosy, and for which both he and his companions received shelter at his home. In this land Saint Apollinarius likewise preached tirelessly about Christ and he converted many of the pagans to Christianity, for which he was subjected to persecution on the part of unbelievers. They beat up the saint mercilessly, and boarding him on a ship sailing for Italy, they sent him back. After a three year absence, Saint Apollinarius returned to Ravenna and was joyfully received by his flock. The pagans, however, having fallen upon the church where the saint made Divine Liturgy, scattered those at prayer, and dragged the saint to the idolatrous priests in the pagan temple of Apollo, where the idol fell just as they brought in the saint, and it shattered. The pagan priests brought Saint Apollinarius for trial to the new governor of the district, named Taurus.

Apollinarius worked here a new miracle: he healed the son of the governor, who had been blind from birth. In gratitude for the healing of his son, Taurus strove to shelter Saint Apollinarius from the angry crowd. He dispatched him to his own estate outside the city, where the son and wife of Taurus were baptised, but he himself fearing the anger of the emperor did not accept Baptism, but conducted himself with gratitude and love towards his benefactor. Saint Apollinarius lived for five years at the estate of Taurus and preached without hindrance about salvation. During this time pagan priests dispatched letters of denunciation to the emperor Vespasian with a request for a sentence of death or exile of the Christian "sorcerer" Apollinarius. But the emperor answered the pagan priests, that the gods were sufficiently powerful to take revenge for themselves, if they reckoned themselves insulted. All the wrath of the pagans fell upon Saint Apollinarius: they caught hold of him when the saint left the city setting out for a nearby settlement, and they beat him fiercely. Christians found him barely alive and took him to the settlement, where he survived for seven days. During the time of his pre-death illness the saint did not cease to teach his flock and he predicted, that after persecution Christians would enter upon better times, when they could openly and freely confess their faith.

Having given those present his archpastoral blessing, the Priest-Martyr Apollinarius expired to the Lord. Saint Apollinarius was bishop of Ravenna for 28 years and he died in the year 75 AD.

(Image is of the altar in the Church of Sant'Apollinare in Classe, Ravenna.)
Posted by Justinian at 11:14

One of the most beautiful Saint stories I've read! Thank you for posting it. St. Apollinarius, please pray for us.

I'm glad you enjoyed it! I love Saint Apollinarius a great deal.

You'll also notice that the church is a great deal of East-West fusion (or intersection) thanks to it being in Ravenna, the Byzantine capital of Italy.

That is interesting. It'll take awhile for me to straighten all those details out though.

For some reason for awhile now I have not been able to post under "open ID" on blogspots. Frustrating. Hence the different identity, but it's still me, desertseeker.

Ah, I see. Well, I've changed the name-tag on my posts to...'the Hermit' of my old pre-Orthodox days is now gone, entire.