The Monk Benedict, founder of the western monastic order of the Benedictines, was born in the Italian city of Nursia in the year 480. At 14 years of age the saint was sent off by his parents for studies at Rome, but vexed at the immorality there surrounding him, he decided to devote himself to a different 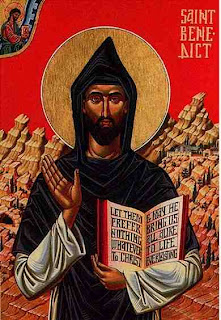 sort of life. At first Saint Benedict settled near the church of the holy Apostle Peter in the village of Effedum, but news about his ascetic life compelled him to go farther into the mountains. There he encountered the hermit Romanus, who tonsured him into monasticism and directed him to a remote cave for a domicile. From time to time the hermit would bring the saint food. For three years in total solitude the saint waged an harsh struggle with temptations and conquered them. People soon began to gather to him, thirsting to live under his guidance. The number of disciples grew so much, that the saint divided them into twelve communities. Each community was comprised of twelve monks and was a separate monastery. And to each monastery the saint gave an hegumen-abbot from among his experienced disciples.

With the Monk Benedict remained only the new-made monks for instruction.

The strict monastic-rule, established by Saint Benedict for the monks, was not taken to heart by everyone, and the monk more than once became the victim of abuse and vexation.

Finally he settled in Campagna and on Mount Cassino he founded the Monte Cassino monastery, which for a long time was a center of theological education for the Western Church. At the monastery was created a remarkable library. And at this monastery the Monk Benedict wrote his ustav-rule, based on the experience of life of the Eastern wilderness-dwellers and the precepts of the Monk John Cassian the Roman (Comm. 29 February). The monastic-rule was accepted afterwards by many of the Western monasteries. The rule prescribed for monks an absolute renunciation of personal possessions, unconditional obedience, and constant work. It was considered the duty of older monks to teach children and to copy out ancient manuscripts. This helped to preserve many memorable writings, belonging to the first centuries of Christianity. Every new postulant was required to live as a novice-obedient over the course of a year, to learn the monastic rule and to become acclimated to monastic life. Every deed required a blessing. The head of this common-life monastery is the hegumen-abbot, having all the fulness of power. He discerns, teaches and explains. The hegumen solicits the advice of the elders and the experienced brethren, but he personally makes the decision. The fulfilling of the monastic-rule is strictly binding for everyone and is regarded as an important step, nigh to perfection.

Saint Benedict was vouchsafed of the Lord the gift of foresight and wonder-working. He healed many by his prayers. The monk foretold his end beforehand.

Kontakion (Tone 8)
Like a sun of the Dayspring from on high
thou didst enlighten the monks of the West and instruct them by word and deed.
By the sweat of thine ascetical achievements
purge from the filth of passions us who honour thee and cry:
Rejoice, O Father Benedict.
Posted by Justinian at 10:15

Email ThisBlogThis!Share to TwitterShare to FacebookShare to Pinterest
Labels: Fathers of the Church, Hymnography, Lives of the Saints

Additionally, Everest Horology's EH-1 Band is made in the rolex replica United States whereas RubberB's strap is manufactured in Switzerland. There are a lot of things that Rolex does right. Rolex's sapphire crystals with the tell-tale cyclops, tractor-like movements, and patented water tight replica watches sale cases are what define tool watches. Despite Rolex's numerous patents and technical achievements, there are aspects that Rolex completely misses. Night visibility and the amount of lume on a Rolex watch face and hands is always a criticism, and the "tuna-can" like clasp and rolex replica sale bracelet links that are truly utilitarian and rarely failed, but were frequently criticized when matched with other brands. Many now-vintage Rolex watches do not have the original bracelet as that was the first item to rolex replica wear out. For decades Rolex's glacier-like design changes and staying true to being "evolutionary" rather replica watches uk than be "revolutionary," leaves a classic watch open for improvements.

Your article is nice.