Saint Kenelm, the King-Martyr of Mercia 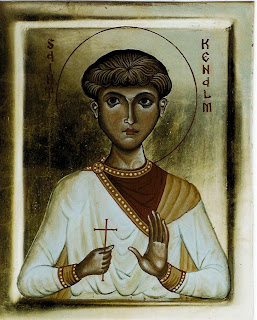 In AD 821, King Cenwulf of Mercia died at Basingwerk, while campaigning against the Welsh of Powys. He left two daughters, Cwendreda and Burgenhilda, and a son, a child of seven years old, named Kenelm or, more properly, Cenelm, who was chosen to succeed him. Cwendreda envied her little brother and thought that, if he were killed, she might reign as Queen. She therefore conspired with her lover, Askbert, who was her brother's tutor and guardian, and gave him money, saying, "Slay my brother for me, that I may reign." Burgenilda was not privy to this wicked deed, however, for she loved her little brother.

So Askbert took Kenelm out into the Forests of Worcestershire on a hunting trip. After the exertions of the chase, the young lad soon tired with the heat, and decided to lay down under a tree for a nap. Askbert, meanwhile, began to dig a grave; but the boy suddenly awoke and admonished him, "You think to kill me here in vain, for I shall be slain in another spot. In token, thereof, see this rod blos-som." And he thrust a stick into the ground, which instantly took root and began to flower. It grew, in years after, to be a great ash tree, which was known as St. Kenelm's Ash. Unperturbed, Askbert took the little King further into the forest and up to the Clent Hills, near Halesowen, where the child began to sing the "Te Deum," the assassin smote his head clean off; and then he buried him in the thicket.

Now, at the same time, a white dove is said to have flown into the church of St. Peter in Rome, with a letter in its beak which it deposited on the high altar. And men took the letter and tried to read, but they could not make it out, for it was written in English. At last, an Englishman was found, however, and he read the letter. It stated that Kenelm, the little King of the Mercians, had been cruelly murdered and his body hidden in a thicket.

So the Pope wrote letters to the kings of the English and told them what an evil deed had been done in their land, and men went forth to seek the body. As they went, they saw a pillar of light shining over a thicket in Worcestershire and, there, they found the body of Kenelm. They carried him to the Royal Mercian Abbey at Winchcombe, in Gloucestershire, where he was buried with all honour and reverred as a martyr. But over the place where they found his body, they built a little chapel. Today it is the Church of St. Kenelm at Romsley in the Clent Hills.
Posted by Justinian at 09:24

Email ThisBlogThis!Share to TwitterShare to FacebookShare to Pinterest
Labels: Anglo-Celtic Orthodoxy, Lives of the Saints

Such a beautiful and tragic story! I regret Kenelm's death a lot! Why it always should be like that!? Why should good people die for the sake of cruel people's interests.

Such a beautiful and tragic story! I regret Kenelm's death a lot! Why it always should be like that!? Why should good people die for the sake of cruel people's interests.

thanks for sharing...
สูตรบาคาร่า
goldenslot casino

Please keep updating this blog, it's been too long. Great post! We adore this blog and This information is very good.

It's really useful for all peoples.

Thanks for this post because i read this post.I visit your site you write very good artical.So thanks a lot...
หวยชุดรัฐบาล