Returning to The Arena 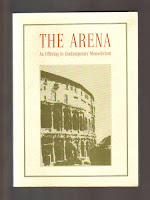 So far, 2009 has been a year that has been noteworthy solely for the amount of disasters, misfortunes and other general unpleasantness that has visited both my family and myself. I am not proud of it, but I admit, I have fallen off the wagon, and hit pretty hard. It has not been easy, either, to come back to the regular life of an Orthodox Christian--one of prayer, fasting, and, above all, repentance. This blog is not intended as a kind of public confessional; however, in coming back to what I let slip for a few months, I have again picked up St. Ignatius Brianchaninov's The Arena: An Offering to Contemporary Monasticism.

Normally, it is bad advice for people in the world to read literature addressed to monastics. The reasons for this are many, but the most important is that it can create problems for those of us prone to delusional vainglory. However, blessed Fr. Seraphim of Platina often recommended this book for lay people in the world, because it gave advice about how to hold on to what is authentically Orthodox in a "modern" world.

I began reading it during Great Lent of this year. I did not finish it; this was not, entirely, through lethargy or laziness (although those were a part), but because I decided not to go on to the next chapter until I felt that I had fully absorbed what I had read in the chapter I was on. To anyone that knows me, it is no surprise that in 40 days, I managed a scanty 11 chapters. And, to claim that I really understood what I was readying (beyond the level of mere psychological comprehension), is probably grossly overstating the reality of the situation.

Nevertheless, St. Ignatius is a marvel. In returning to The Arena (both the text and the spiritual struggle), I reread the last couple of chapters that I had left off on. This gem is from Chapter 11: "On the Solitary Life":

It is impossible for a person who is still in the realm of carnal sophistry and who has not received the spiritual realization of fallen human nature not to give some value to his actions and not to consider himself of some worth, however humble he may appear outwardly. True humility is incompatible with carnal sophistry and impossible for it; humility is a property of spiritual understanding. Says St. Mark the Ascetic:

"Those who have not come to consider themselves debtors to every commandment of Christ honor the Law of God in a bodily manner, without understanding either what it says or on what it is based. Therefore, they think it can be fulfilled by actions"

From the words of the holy Father it is clear that a person who thinks he has some good work to his credit is in a state of self-deception. This state of self-delusion serves as a basis for the delusion by demons. In a Christian's wrong conception the fallen angel gets a foothold, and to this false idea he easily adds his own deception, and by means of this deception he subjects the person to his power, and casts him into so-called demonic delusion.

Would that I had paid attention the first time. As it turns out, the path to evil is often not made by someone choosing wickedness, but by those of us that choose to do the right thing for the wrong reason. And then, pretty soon, we add wrong and wrong on top of wrong--but, after all, it is ok because we are still Christians, and the Lord has forgiven us.

The path to Antinomianism is very much shorter than any of us would like to believe.

So once again, here I am acting as if I were going to live ten thousand years, and have time to get back to the real work of Christ--that of reforming my life and changing my nous--could wait until next week/month/year/etc. Ignoring Fr. Seraphim's words "It is later than you think; hasten, therefore, to do the work of God" does not make the reality go away. Perhaps I finally hit rock bottom last week; I could have sworn I'd gotten there before now, but apparently, I am more stubborn and willful than even I give myself credit for. So maybe, now that I have almost literally vomited out the evil after receiving the due penalty of my error, I am ready to begin again.

+Lord Jesus Christ our God, through the prayers of Thy most pure Mother, the Theotokos and Ever-Virgin Mary, and of all the Saints who have been well-pleasing to Thee from all ages, but especially those of St. Ignatius Brianchaninov by whose pen we who live in these latter times are able to even dimly perceive the light of Thy Glory, bring about of willing and true conversion unto Thee, both now and ever and unto the ages of ages. Amen.
Posted by Justinian at 18:30

Email ThisBlogThis!Share to TwitterShare to FacebookShare to Pinterest
Labels: Fathers of the Church, Meditation