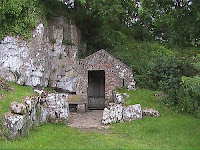 St. Seiriol lived in the sixth century, and after renouncing his royal heritage, he established for himself a cell at Penmon where he could practice the ascetic life. St. Seiriol had a great friendship with St. Cybi, who had established a monastery in Holyhead. The two friends would meet once a week, walking from their opposite ends of Anglesey to Llanerchymedd in order to pray together. Because St. Cybi would spend his journeys facing the rising sun in the morning on his way there, and the setting sun in the evening on his way back, and St. Seiriol had his back to the sun in both directions, they became known as 'Cybi the dark' and Seiriol the fair' respectively.

St. Seiriol’s fame as an ascetic and wonderworker spread over the land, and he was visited more frequently, until his place of meditation became a regular pilgrimage site. To find his peace once again he would walk to the headland and row out across the treacherous strait to a small island of limestone, known as Ynys Seiriol (Puffin Island). Here he built for himself another skete. The remains of a church are visible on the island and Saint Seiriol is said to be buried here.

The picture here is from the saint's original dwelling at Penmon. The building is known as St. Seiriol's Well, and the low stones on the right are said to be the remains of the original chapel and skete where the saint resided.

We hymn thee, O Father Seiriol,
for thou didst turn the Welsh wilderness into a fertile vineyard for the Lord.
By this our intercession, O Saint,
we implore thee to pray to Christ our God,
that our labours may be blessed and our souls may be saved.

Thy radiant memory illuminates the ages, O holy Seiriol,
defying the darkness of apostacy and error.
May the day once more dawn when all Wales will confess the Faith of our Fathers
and keep festival to honour thee.
Posted by Justinian at 07:46

I always enjoy your postings on the saints. These saints of the West seem especially dear and close. Thank you for this. St. Seiriol, please pray for us sinners.

Thanks Todd. I'm glad that someone gets something out of them! I, too, love these obscure western saints.