The Vladimir Icon of the Mother of God 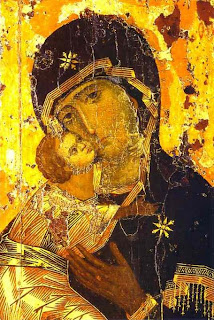 The Vladimir Icon of the Mother of God was written by the Evangelist Luke on a board from the table, at which the Saviour ate together with His All-Pure Mother and Righteous Joseph. The Mother of God, in seeing this image, exclaimed: "Henceforth shalt all generations call Me blessed. Let the grace of both My Son and Me shalt be with this icon". In the year 1131 the icon was sent from Constantinople to Rus' to holy Prince Mstislav (+ 1132, Comm. 15 April) and was installed in the Deviche monastery in Vyshgorod, the ancient appanage city of holy Equal-to-the-Apostles Princess Olga.

The son of Yurii Dolgoruky, Saint Andrei Bogoliubsky, in 1155 brought the icon to the city of Vladimir and installed it in the reknown Uspenie-Dormition cathedral built by him. And at this time the icon received its name of "the Vladimir Icon". And in the year 1395 the icon was first brought to Moscow. Thus the blessing of the Mother of God tied the spiritual bonds of Byzantium and Rus' via Kiev, Vladimir and Moscow.

The festal celebration of the Vladimir Icon of the Most Holy Mother of God occurs several times during the year (21 May, 23 June, 26 August). The most solemn celebration occurs on 26 August, the feast established in honour the Meeting of the Vladimir Icon upon its Transfer from Vladimir to Moscow. In the year 1395 the fearsome conqueror, khan Tamerlane, reached the Ryazan frontier, took the city of Elets and advancing towards Moscow he came nigh the banks of the River Don. Great Prince Vasilii Dimitrievich went with an army to Kolomna and halted at the banks of the River Oka. He prayed to the Sainted Hierarchs of Moscow and the Monk Sergei for the deliverance of the Fatherland, and he wrote to the Metropolitan of Moscow Saint Kiprian (Comm. 16 September), that the pending Dormition Fast should be devoted to zealous prayers for mercy and repentance. Clergy were sent to Vladimir, where the famed wonderworking Vladimir Icon was situated. After Divine Liturgy and a molieben on the feast of the Dormition, they clergy took the icon and in a church procession conveyed it to Moscow. Along the way, on both sides of the road and innumerable number of people prayed kneeling: "O Mother of God, save the land of Russia!" And in that selfsame hour, when the people of Moscow were meeting the Vladimir Icon on Kuchkov Field, Tamerlane was slumbering in his tent. Suddenly he saw in a dream a great mountain, at the summit of which coming towards him were the sainted hierarchs with golden staffs, and over them in a brilliant radiance shone a Majestic Woman. She commanded him to leave the domains of Russia. Awakening in fright, Tamerlane asked the meaning of the apparition. The experts answered that the Radiant Lady was the Mother of God, the great Protectress of Christians. Tamerlane then gave the order for his troops to turn around. In memory of this miraculous deliverance of the Russian Land from Tamerlane on Kuchkov Field, where the Meeting of the Vladimir Icon took place, they built the Sretensk-Meeting monastery. And on 26 August there was then established the all-Russian celebration in honour of the Meeting of the Vladimir Icon of the Most Holy Mother of God.

The historical days of 21 May, 23 June and 26 August, connected with this holy icon, have become memorable days for the Russian Orthodox Church.
Posted by Justinian at 08:22

Wow, can't get much more significant than this! I've heard the story before, but hadn't yet formed the picture of the icon in my mind. Now, thanks to you, I have. I will share this with my family.